The only thing I know is that I‘m confused. Confused and overwhelmed. 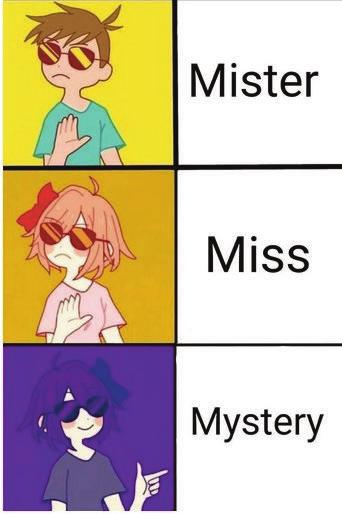 A life without explanations would be easier. Hey, it‘s just me, and I just want to be myself and do my stuff.

But sadly that’s not how it works. At least if you are not cis. (Of course our freedom and individuality in general depends on our privileges, and it is not working to exclude this. Here I just want to focus on this gender thing and I talk from a white (young, educated) and able-bodied perspective)

It is not just me being confused. People are really confused and have many questions for you if you are not a 100 percent straight cis woman or man, and they also have their own explanations for your identity. Thanks. I don‘t want them. Then I prefer having my own.

But I still do not know what I am, or maybe why I am what I am. Is it the society with their roles that makes me feel dysphoria? Is it my brain, and I’m just born in the wrong body plus hating the binary gender roles? Am I intersex without diagnose, and saying “I’m nonbinary” is my way to handle it? Does it matter?

All explanations are based on some theories about gender. Some are based on the Idea of an existing biological sex, others are based on the artificially constructed societal gender roles, or on any other ideas and ideologies that society and our environment teach us.

An explanation is a fucking intimate thing. It makes us vulnerable and hurts other trans* people. In the end all explanations will be used against us or our friends, it‘s like talking with cops.

I don‘t know how you deal with that, but sometimes I need explanations. I need them to make it easier to tell people how I want to be treated, and what are my needs. And I need them to get understanding when I share my daily struggles.

Sometimes we will maybe use explanations to prove our legitimacy as man, woman or trans* with distancing us from other trans* people: when we fear that their presence and performance lowers our male/female/enby/trans* legitimacy in the eyes of others. (Maybe we do that because of internalized transphobia.)

This hurts others, who are just as legitimate as we are (every other person is). Of course this is shitty, and maybe we should look for a different strategy and work to change this. But I don‘t want to judge others for their need to explain. A cis person (at least a white able-bodied) does not have to prove their legitimacy as a woman or a man. They do not even think about it.

I think I will keep my confusion, and maybe I can learn to appreciate it. I will never know why I feel how I feel. What I know is, that with some explanations I feel more comfortable, with some less. And others hurt me.

At least I have some clearness how I want to deal with this stuff.
I want to accept that we sometimes need explanations. I want to try not to judge other people for their explanations, and I want to tell them when they hurt me.

I see you
In the Mirror, it’s strange. A familiar face.
I cup her cheek, stroking it gently, an alien planet to explore.
She reaches out and touches me with my icy alien fingers.
Looking at my eyes with hers I see him.
I run the razor over his cheek and she whispers thanks while
I scream.
Blink once, he smiles. Blink again he is gone.
She doesn’t know how to console him. looks to me.
I shake my head and turn away