It is nice to be recognised for who you are. Unfortunately, you have to expect that non-enbies will misunderstand what you mean by that. Not all enbies come out at all. If pronouns aren’t that important to you, you might not have to explain anything to the world. But if people really want to hear a reason why they should treat you differently, coming out may be necessary/useful.

Coming out as gay or lesbian can be risky – in some countries it is still punishable, and often at least some of your family or even friends will turn away from you. Coming out as non-binary is often less dangerous – it is much more likely that the issue will simply be passed over, ignored, or not believed. This can be very painful in itself, of course. And it doesn’t change the violence that the gendered world itself throws against you.

But if you want to come out, good luck! It’s best to prepare a bit for the conversation. A possible outline for such a conversation could be:

Example: “Actually, I’ve been wanting to talk to you for a while about a topic that makes me happy, but also a little scared. I’ve discovered that I’m non-binary, so neither a man nor a woman. I’m still trying to figure out myself what that means for me, other than wearing more tank tops in the future. I’d like it if in future you called me your child rather than your son/daughter – and I’d like to be called <new name> because <deadname> is too masculine/feminine for me. If you’re curious, read this weird zine on the subject. It’s a good thing for me, you don’t have to worry about it. But please keep it to yourself for a bit, and don’t post it on social media for now, okay?” 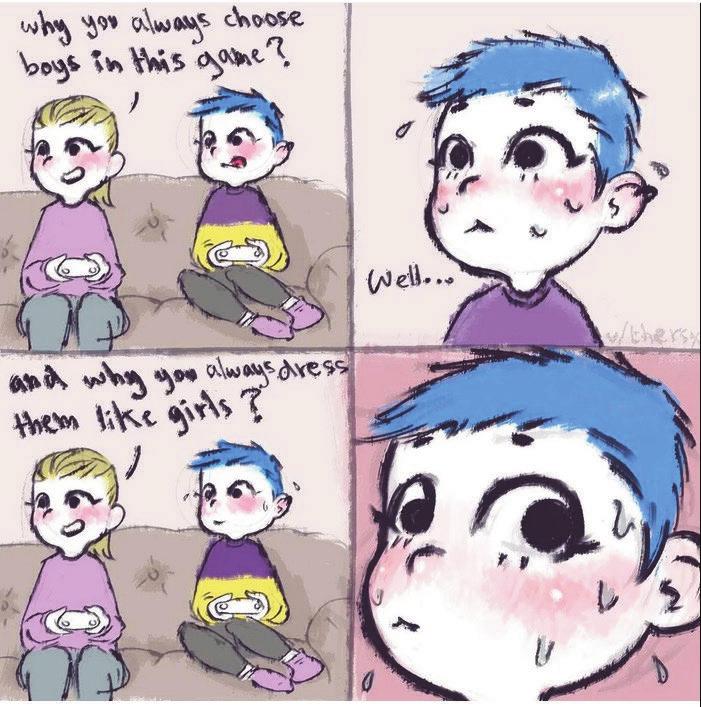 How people will react to this is impossible to predict. 95% of the time it’s probably going to be about their feelings, no matter how well or badly you get the point across. In most cases they don’t have a sense of how hard it is for you at first, they have to process their own emotions first. No matter how they react, plan some time for yourself afterwards to process their reaction.

And you know what? IT’S SCARY. It’s perfectly normal if you find it difficult and scary. Talk to yourself as if you were talking to your favourite person, with the same kindness and gentleness. Taking the risk of being seen is HUGE and scary, and homie I shook and cried when I came out to my first people. You don’t have to do it perfectly straight away.

What do you do when other people misgender someone else?

Enbies don’t always want to make more work for others with their gender trouble. Or they don’t want to be the person to address it themselves. Or they only want to correct some but leave it well alone with others (maybe they are not outed to everyone). Or they only want the correction when they are not around. So first ask the enby concerned if they want you to correct others – and respect those wishes under all circumstances.