Blue woke up from the terrible feeling of getting unplugged. Reality hit them in the face, hard. Blue gasped for air and grabbed the armrest of their chair. The dream was over.

“Enough Internet for today. It’s already noon. If you don’t get your ass up and go to work, we can’t pay rent today.” Blues father held the cable which had connected Blue to cyberspace until now. “And make some food for your sister.”

He dropped the cable and stomped off, to the other end of the living container. Kayla, Blue’s sister, hid unter her sheets, as usual. When the mood was tense at home, that was the only thing you could do. She read something, probably. Blue stretched and got up. 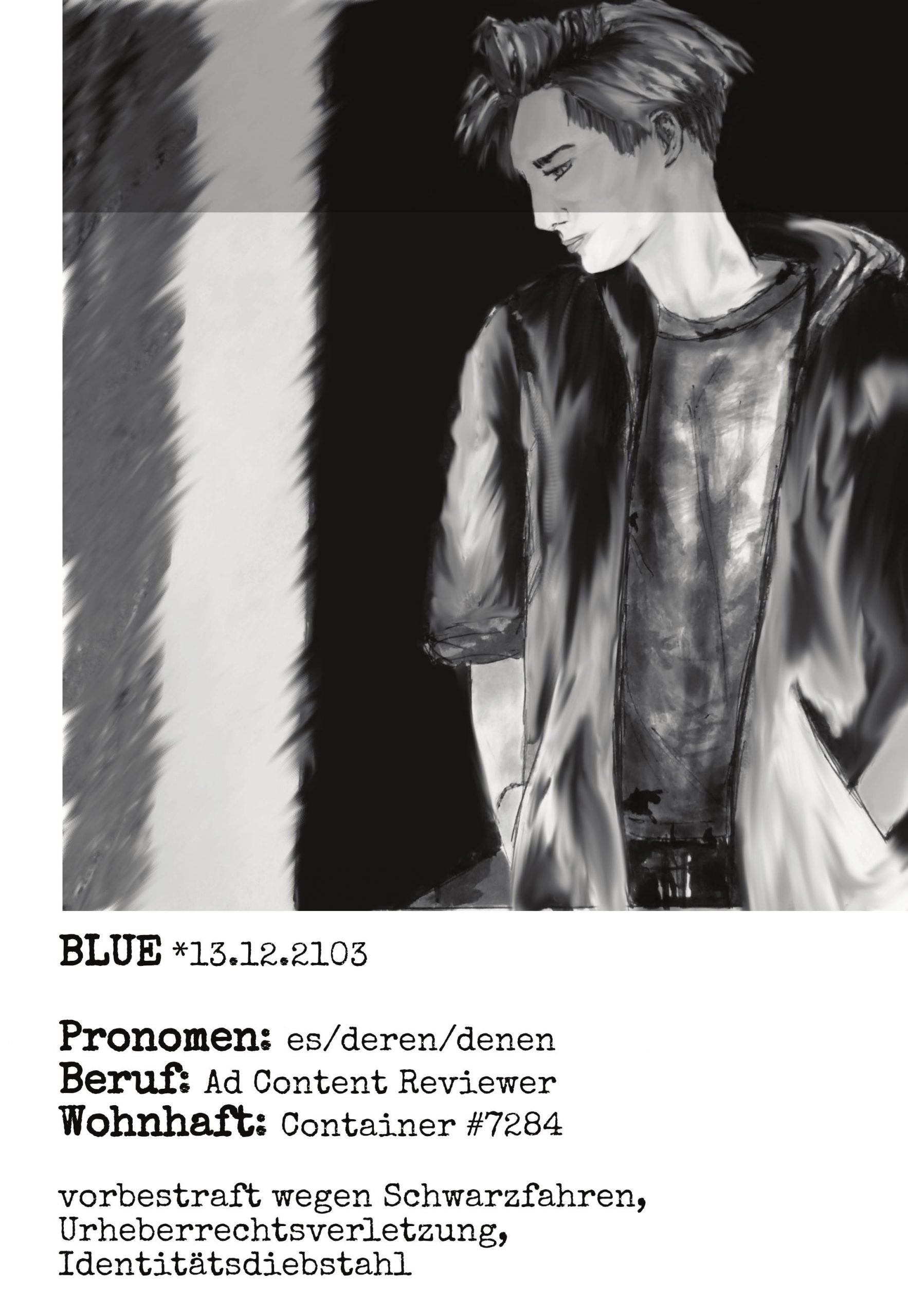 He dropped the cable and stomped off, to the other end of the living container. Kayla, Blue’s sister, hid unter her sheets, as usual. When the mood was tense at home, that was the only thing you could do. She read something, probably. Blue stretched and got up.

They didn’t have a fridge, but Soylent didn’t need to be cooled anyway. Blue fetched the powder from the bag that hang from the ceiling, to keep the rats off. They filled up two cups with filtered water, and mixed the Soylent with it. Blue stepped to the bed of their sister and reached out with the cup of Soylent. A hand appeared from under the sheets, grabbed the cup, and vanished again.

Whenever Blue wasn’t in cyberspace, they barely endured their home. Their father was drinking again, and Kayla didn’t hide under the sheets for no reason. Blue didn’t hesitate for long, grabbed their worn-out jacket and left the living container without even uttering a hint of a good bye. Maybe today is the day I snap. Time to go to work.

It wasn’t easy for Blue to keep their head in this world. They had always had one leg in cyberspace, at least since they could think. There weren’t many reasons to hold on to reality. In the digital realm, Blue could be whoever they wanted.

Ironic. Although everything in cyberspace is either a one or a zero, there are so many more niches than in meatspace. So much more room for me to do and be what I want.

Just as ironic was that Blue still had to take the train to work every day, even though their work happened exclusively in cyberspace. Every day they plugged out, stepped on to a train, walked up to the highrise, and plugged in again. Under different circumstances Blue would have complained, but since Ivan had so, they didn’t see him at work again. Critical thinking was no character trait UC Pay valued in the day laborers which checked advertising-memes for lewd material. And so Blue kept their mouth shut, the hands in the pockets, and walked up to the train station.

“Sorry folks, I got no cash till tonight. You know how it is.”

Three shady figures had appeared from some corner. Blue knew Ian and his brothers since school days. Ian put away his knife when he recognized Blue.

“That’s what you say every morning. We’re not here for fun, you know. You didn’t pay your fee this week.”

Demonstratively, Blue turned their trouser pockets inside out. “You sound just like my father.”

Ian’s little brother crossed his arms. “I know you like them, Ian. But maybe we don’t impose enough respect. Blue should pay their fee just like anyone else.”

Blue shrugged. “I’m back in a few hours. How long do you stay today?”

The little brother gave a nasty laugh. “Long enough, shorty. Long enough.” The gang stepped aside, and Blue hurried to the train.

During the train ride, Blue glanced out of the window at every station. But no ticket controllers got in. At least the Adrenaline distracted them from the tensions at home. Downtown, they hurried to the UC Pay tower. The tower was round and barely had windows, like a medieval castle keep. Not unfitting – every time they entered the tower, Blue felt like a serf. But where you would have expected a winding stair-case, there was an elevator.

Blue was late. The others knelt in their alcoves, connected in trance. Blue found a free slot and plugged in.

Work was dull. Back then, after school, it had sounded cool to work with memes. They had revolutionized the creative sector. In the old days, advertising had been created by creative designers, artists, and other good-for-nothings – they lived in abundance, threw cocaine parties and celebrated their horrendous budgets. Back then, the suits had been dependent on the differently minded, and left them a free hand.

But at some point big data tracking showed that buys were mostly motivated through memes – bottom-up content creation. In a ruthless attention economy, the masses competed relentlessly in declaring a different brand for the hot new shit. The only task which the suits had to pay for nowadays was to sort out the memes which didn’t comply with the corporate policy. Blue was a few decades late with the big dream of living off creativity.

The only answer Blue had to this was sabotage. All memes were sighted by four eyes – Blue had to trust in their colleagues that they thought similarly. And there was a certain rhythm where it worked. About every eighth meme which usually would have been to provoking, improper, or subversive, Blue let through nonetheless. Of course, sometimes they got a slap on the wrist, but rarely enough that Blue could keep the job for another day, and their family didn’t sit on the street.

After four hours, a reminder interrupted Blue. From now on, everything Blue did counted as overtime – and overtime was paid worse than the first four hours. If it’s supposed to be enough for rent and Soylent, and if I don’t want to keep Ian hanging, I need to continue for two hours. Drek.

But Blue had enough of the Soylent. Enough of Ian, work, rent, and the fragging container. Blue unplugged and left the tower. Most of the others were still in trance when they left.

Something rumbled in Blue. Maybe today is the day I snap. Blue put on an FFP2 mask and a hood. They turned off their kommlink. No traces, neither digital leftovers. With its rounded off windows, the supermarket looked a bit like a medieval cathedral. Only that the colorful windows didn’t show saints, but sales deals. The doors opened by themselves when Blue walked inside.

Magically, Blue was drawn to the area with the organic food, where they had even mushrooms and algae. The plants had died with the bees and the other animals. And while Soylent provided all the nutrition necessary, today Blue needed something that tasted like food. Casually, Blue put a hand full of mushrooms in each pocket. The jam in the supermarket was unpleasant, but it was a good cover. A glass fo algae and a synthetic softdrink vanished in the worn-out jacket. Blue grabbed an anorganic chewing gum – not paying at all would be suspicious.

“Do you have a payback card?”

Blue shook their head and counted some coins.

“I am sorry, we don’t take cash anymore. Change of regulation.”

Blue looked at the cashier, incredulous. “And how are people supposed to pay who don’t get digital money?” Blue shrugged. “You know what, keep your damn chewing gum.” They left it at the register and stomped off to the exit.

Suddenly, a heavy hand appeared on Blue’s shoulder. “Excuse me, can you come with me for a moment?”

Blue’s got just one chance. They ram their elbow behind, hitting the security guard’s belly. No time to lose, Blue sprints towards the doors. They are closing slowly – doesn’t seem like they want to let Blue go. Blue turns on the side, throws themselves through the doors, and hits the road. That’s when the sirens start.

After a short sprint, Blue looks behind. Two guards in waistcoats are following them. Damn, my hood slipped down.

Blue turned around a corner, and another one. Where is that noise coming from?

Usually, this was a busy road, but today no cars dared to come. The few cars parked at the side had smashed windows. Black-clothed people kicked against side mirrors, spray-painted slogans on the walls and windows, and threw stones in one direction. A strange fog was coming from there. Or smoke? In this chaos I can disappear.

Blue fixed their hood and became part of the crowd. There was a stone on the ground, which fit just perfectly in Blue’s hand. Blue watched for the guards – did they follow me here?

The security guards stood in the alley where Blue came from and gasped for air. They didn’t dare to go into the protest. Blue felt safer at once.

A few meters ahead, some others tried to rip a street sign from the ground. There used to be a no-parking zone. Blue joined them. Maybe they can help me against the rent-a-cops? But when Blue looked up, the guards were leaving anyway.

On the ground there was a black cloth. Blue wondered where it came from – but it didn’t matter. Blue tied the cloth across their face and became part of the anonymous crowd.